Since Venus appears now to have accepted Andy as her buddy, she is being allowed to stay outside the kennel to PLAY for longer periods of time.  In fact, she is allowed out of the kennel most of the time when we're home to supervise her, generally only going back in when we're at work or otherwise away from home or asleep at night (or when she is getting too wild and needs a "break", at least until her sutures are removed next week).

She and Andy actually seem to be becoming true buddies now, playing happily together with their toys.  They both are particularly fond of the "ring" cat toy which seems to provide plenty of mental and physical stimulation. 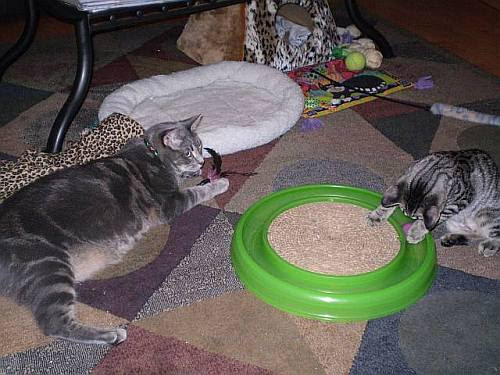 She is still figuring out the whole scratching post thing and exactly how that works, but I'm sure she'll get it eventually.  Perhaps Andy will explain that process to her this weekend! 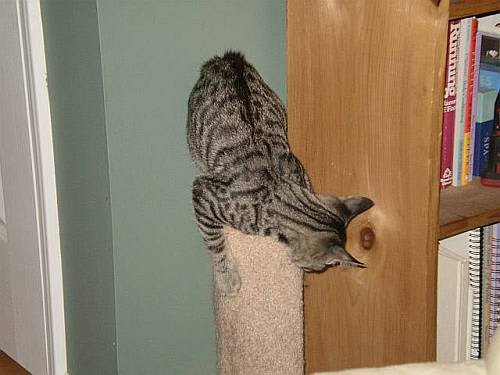 Andy also has been showing Venus good hiding places from the dogs, as well as bringing her some of his other favorite toys.  They spend a lot of time together, and she looks to him for guidance when faced with things out of the ordinary such as an unfamiliar noise, etc., just like a big brother!  They play chase, "pawing" games (fortunately with no claws out), and "Halloween cat", and Andy even lets Venus play "pounce" on him without getting upset.  She really likes all the toys he's showed her, but one of her favorites remains the "tail"... 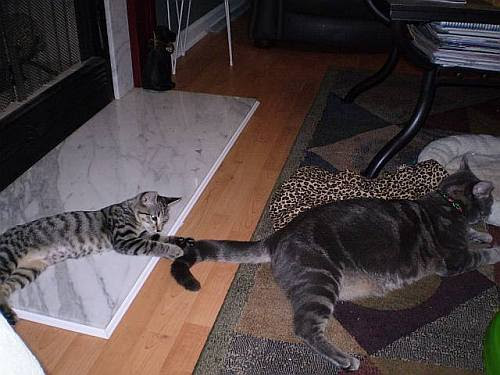 Posted by Tammy Kaufman at 7:15 AM