I didn't have time to paint all the beautiful landscapes that beckoned me at Joyner Park Sunday evening, so I decided to paint at home from our photographs of the park. There was one photo which I particularly liked, so I tried painting the scene in both oil pastels and soft pastels, although I have to admit, when the reference photo turns out this nicely, it's pretty much impossible to do it justice.
I haven't used my oil pastels in a little while, so it was actually a lot of fun playing around with a different medium and using a variety of tools including ClayShapers, blending stumps and even a toothpick! And I was pleased with how well the Strathmore pastel paper held up.
Then it was back to my trusty soft pastels for another go at the same scene, only in a slightly smaller size.
I know lots of artists suggest sticking with just one medium until it's mastered, but I just can't help myself - I enjoy them all so much. And even if I never master even one, what fun I'm having experimenting with them all, and that makes it worth the risk to me. :-)

On a somewhat related note, my Artist Page on the Wake Forest Guild of Artists website is now up - thanks Rose!

Speaking of the Guild, our 2014 Tour of Artists is coming up September 6-7 here in Wake Forest. I will be working as a volunteer for the event, but haven't decided yet if I'm going to actually participate as an artist, although probably not. Part of me would like to, but the bigger part of me is much too nervous and intimidated to attempt something so big, especially since I don't have an actual public studio where I could host visitors - just a small spare room in my house where I paint- and I'm hesitant to ask to be included in a group of seasoned professionals while I'm still so new and inexperienced. Regardless, even as just a volunteer, I'll get to be involved with the Tour and perhaps get an inside view of how things work which may prepare me to actually participate next time

Posted by Tammy Kaufman at 8:47 PM No comments:

What a glorious day to be outside painting! This evening kicked off the Six Sundays in Spring free concert series held in the beautiful E. Carroll Joyner Park in Wake Forest. Steve and I set up my easel and pastels under the pecan grove where he took some spectacular photos while I painted a small landscape of some of the park trees with a little (well, okay, a LOT) of artistic license thrown in. I'm still not comfortable painting structures, such as the barns scattered around the park, but hopefully I'll become more at ease with that and eventually start putting them in my paintings as well.
While I was putting the final touches on this little painting, a charming young lady stopped by to see what I was doing and seemed quite interested in the pastels. So I offered her my easel and some paper to create her own pastel painting. She did so well with regular pastel paper, I suggested she try some of the Uart sanded paper I had been using, and she created a beautiful landscape while her younger sister joined her, finishing up the regular paper with a painting of her own. As the concert wound down, the young artists' mom came by and we helped them seal their masterpieces in some glassine paper for safe transport home where they will hopefully be framed for enjoyment by the whole family for years to come. :-)

I had a lovely time painting en plein aire at the park, and look forward to the next few weeks as well. Hopefully next time I'll be able to set up a little closer to some of the other members of the Wake Forest Guild of Artists. I believe one other member was there this evening, but we ended up on opposite sides of the park lawn! I did, however, have the opportunity to chat with an extremely talented street artist who was painting some fabulous creatures and flowers on the paved paths, to the delight of children and adults alike.

Posted by Tammy Kaufman at 9:00 PM No comments:

Sometimes the simplest things can bring the most joy. Things like throwing on a bike skirt paired with a silly pink leopard print helmet, 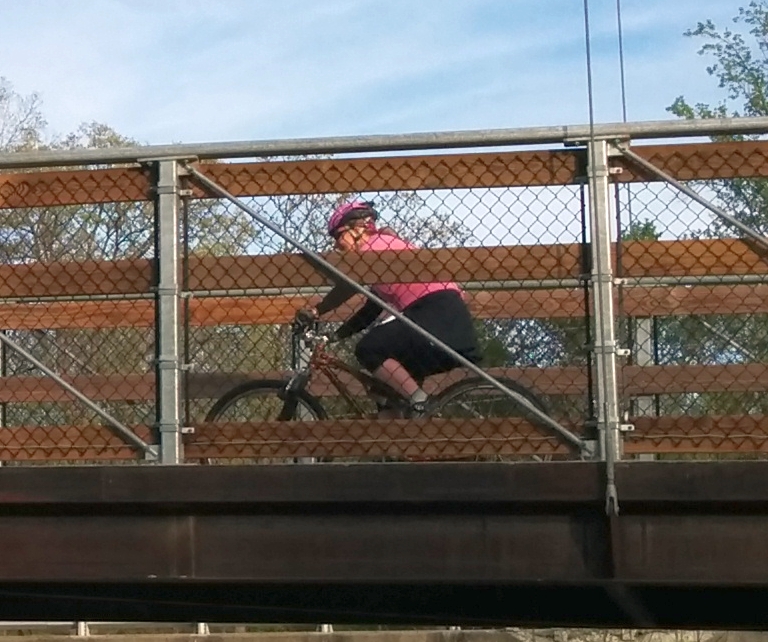 bringing my old leopard print painted bicycle, "Spot", out of retirement from racing and back into more leisurely action, 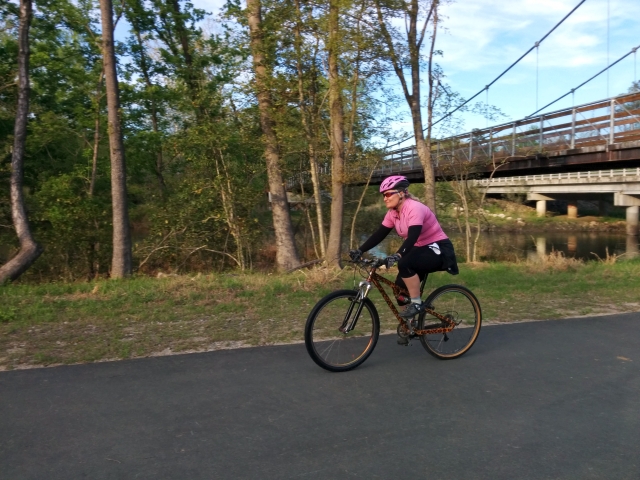 then heading out for a scenic ride on the greenway as it meanders alongside and across the river. 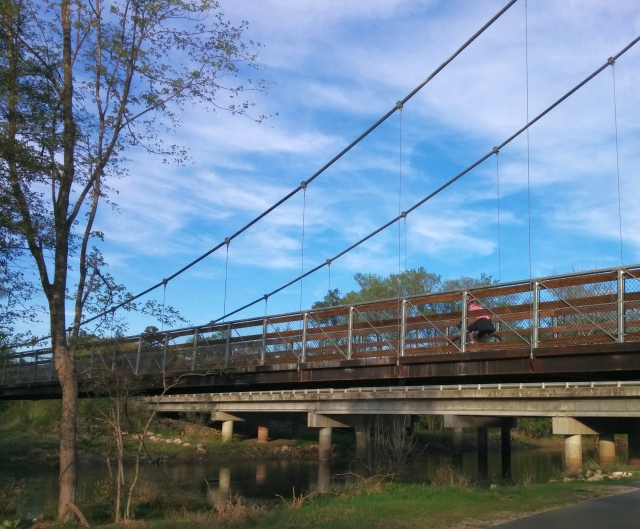 Posted by Tammy Kaufman at 11:56 AM No comments:

Jumping In With Both Feet

This past weekend was a busy one! Things got started Friday night with the opening reception for the "Eggistentialism" Exhibit at Tipping Paint Gallery. Since I had a couple of paintings on exhibit and another entered in the silent auction for Urban Ministries of Raleigh via Tour d'Coop, Steve and I made a brief appearance at the reception where we had the opportunity to view the spectacular array of varied artists' works and chat with some of the artists themselves. As this was my very first tentative step into the public eye with my artwork, I was incredibly nervous, but the Tipping Paint artists were truly delightful and had been so helpful and encouraging during the signing-up process that I was put at ease almost immediately. I still have a difficult time seeing myself as an "artist" (and to be honest I was too shy and insecure to actually wear the label pictured below other than subtly attached to my purse), but I saved my name tag in the hopes that someday in the future perhaps I'll eventually become what I consider a "real" artist and can look back at my current hesitancy and just smile. 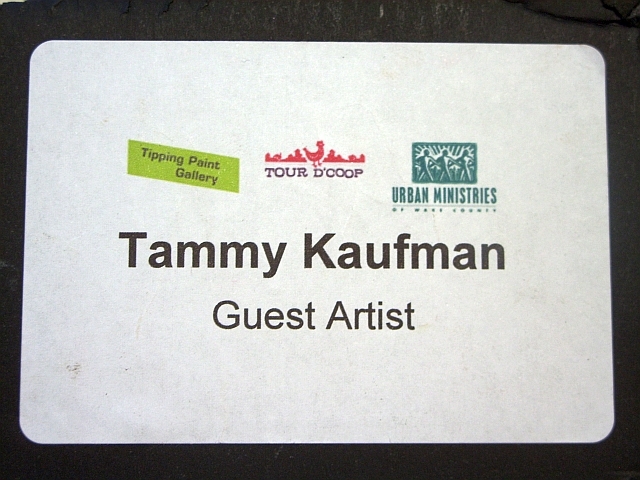 There were so many beautiful works of art at the exhibition, including those on the auction floor, and I was more than a little anxious to see that there were no bids yet on my auction painting when we first arrived. Of course, there were several paintings with no bids at that point, so at least mine wasn't the only one. However, I nearly jumped out of my skin when Steve informed me right after we left that he noticed a bid on my painting as we were leaving! I have no idea who placed it or for how much, but I got a bid and that's just the best feeling right now!
The only thing that would top that would be for my two exhibited paintings to sell too, but at this moment, I'm pretty much still walking on air after seeing a couple of my paintings hanging in an actual gallery and having a bid on my silent auction entry. The Eggistentialism exhibit is running through April 26 at Tipping Paint Gallery, 311 West Martin Street in Raleigh.

And all that was just the start of the weekend! I also had a 6-hour mountain bike race on Saturday, but it ran from noon until 6 p.m., so at least I got to sleep in a little. Realizing I am extremely out of shape, having not been biking much at all with this seemingly never ending winter we've been having (I'll be the first to admit I'm a fair-weather-biker), I still elected to attempt the race on my rigid singlespeed. Right now, it's the smallest, easiest to maneuver bicycle I have, and the race course was on a relatively flat and flowy course, so I figured why not? The first couple of hours were fine - at least after I changed to my padded gloves after the first lap; that rigid fork and unpadded gloves equaled a bad combination. However, by lap four, I began to experience skeletal and muscular pain, and I mean real, severe pain. My left elbow kept going achingly numb, both big toes developed a deep throbbing pain almost like stone bruises, and my knees - particularly the right postsurgical one - were screaming. And that's not even thinking about my back, neck and even chest that were hurting as well. Considering this race was only six hours and on a fairly easy trail, I can only attribute all that to an egregious lack of fitness from not riding hardly at all over the entire winter, and being seriously overweight (damn you, Costco Tiramisu!) By lap five, I was honestly considering switching over to the geared full suspension bike, but my stubborn nature said NO, and I stuck it out to the bitter end with the unsuspended nongeared bike, eventually turning in six laps, the last two of which were just tormentingly, painfully slow. I probably should have been embarrassed by such a lackluster performance but oddly enough mentally I felt great during the whole race, especially for a, as my doctor put its it, "Triple F" - "fat, 50-plus, female". My final finish time was 5 hours and 40 minutes, with my bike computer showing a total ride time of 4 hours and 29 minutes. Had I not taken those three long breaks, I would have had time to get in another lap and mentally I probably could have done that, but in all honesty, I really doubt I had another lap in me physically.

Regardless, between being able to complete the race, having such a fun time at the art exhibit and then even finding a little bit of time to paint on Sunday, overall I'd have to call this weekend a Win.
Posted by Tammy Kaufman at 2:19 PM No comments: