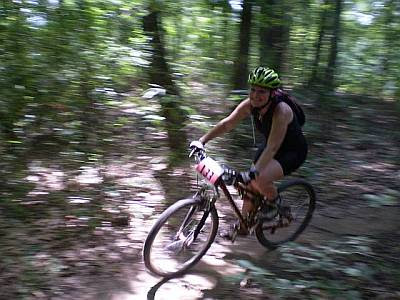 To test out the healing process of my post-surgical knee, Steve and I decided to compete as a Coed Duo in the 6-Hour division at the Cowbell Challenge Mountain Bike race yesterday.  It was painful, difficult and slow-going for me on the challenging 10-mile trail, especially on some of the particularly rooty and rocky climbs, as well as the rough, twisty descents.  However, I somehow managed to turn out two laps which, combined with Steve's two laps, brought us to a grand total of four laps.  I was actually quite happy with my 20-mile total, even though it took me close to four hours to achieve it.

Despite the weakness, fatigue and pain, I was actually quite pleased with my ride.  I managed to ride most of the descents nearly as fast as I had in years past, and also made many of the climbs, despite still not being able to stand and pedal yet!  Steve even commented on how well he thought I was riding, and was surprised at some of the more technical climbs I was making.  I also had the opportunity to be a website race correspondent for this event which was a lot of fun as well.

The real surprise came at the end of the race, though, when the 6-Hour awards were being given, and mine and Steve's team, Chicken Slicks got called up to the top podium spot!  It turns out that we completed our fourth and final lap at 4:01 p.m., a mere 10 minutes ahead of the second place Coed Duo team whose fourth lap was completed at 4:11 p.m.  I love a close and exciting bike race finish! 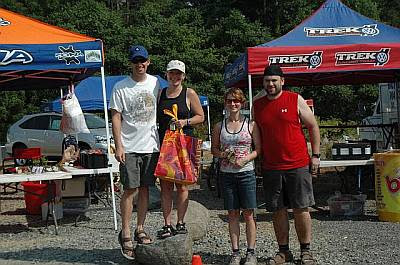 Posted by Tammy Kaufman at 7:24 AM No comments:

2007 Cowbell Challenge Mountain Bike Race
Posted by Tammy Kaufman at 7:12 AM No comments:

"Our deepest fear is not that we are inadequate.  Our deepest fear is that we are powerful beyond measure.  It is our light, not our darkness that most frightens us.  We ask ourselves, Who am I to be brilliant, gorgeous, talented, fabulous?  Actually, who are you not to be?  You are a child of God.  Your playing small does not serve the world.  There is nothing enlightened about shrinking so that other people won't feel insecure around you.  We are all meant to shine as children do.  We were born to make manifest the glory of God that is within us.  It's not just in some of us; it's in everyone.  And as we let our own light shine, we unconsciously give other people permission to do the same.  As we are liberated from our own fear, our presence automatically liberates others."

---From A Return to Love, by Marianne Williamson
Posted by Tammy Kaufman at 5:31 AM No comments:

Spyder and Me
Posted by Tammy Kaufman at 3:14 PM No comments:

Our tennis team had playoffs today but unfortunately we were only able to get one of the two wins needed in order to go to the State Championships in Pinehurst next month.  It was a valiant effort, but not enough to win it.  On the other hand, I wouldn't trade the experience I've had playing with this team for anything in the world.  I've been amazed at the camaraderie that has developed among nine women who didn't even know each other just a few short months ago, but now feel more like family. I feel like we had a great season and surpassed all my expectations, both in success on the court as well as in the friendships that developed.  Here's to you, ladies!  I can't thank you enough.
Posted by Tammy Kaufman at 2:38 PM No comments: