Back to Basics with the Dollar Bike

With its lack of gears or suspension, the Dollar Bike radiates a quiet simplicity. No clicking of shifters, no drivetrain clatter or "squoosh" of suspension. Only the soft rumble of knobby tires on dirt trail. There are no gear decisions to be made - either you're in the correct one or, well you're in the correct one. It's been a long time since my bike of choice was one with no gears and no suspension, but it felt like coming home to ride one again. Since my biking has been a bit sporadic over the past few years, we started out with a relatively easy gear on this 29er at 33x20. 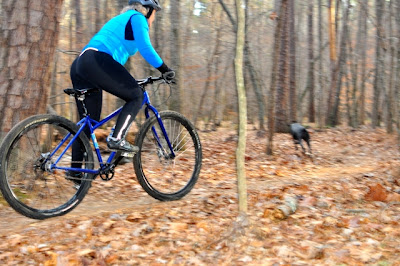 I found, despite my current lack of fitness, with this gearing ratio I could handle the lesser climbs seated in the saddle without too much difficulty, 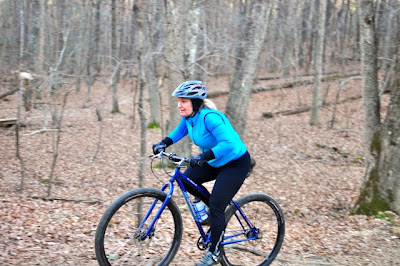 but stood when the terrain turned steeper. The bike held momentum remarkably well, even on the climbs thank goodness! 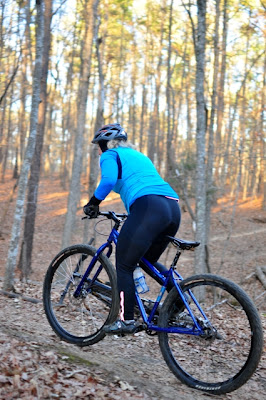 Returning to an unsuspended singlespeed after so many years, I was very pleasantly surprised to find my sense of bike "center" came back quickly and naturally, and I managed to suffer no tire slips on any of today's climbs. 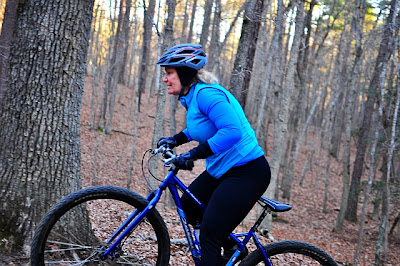 Even Fry was impressed that I actually made that climb. LOL 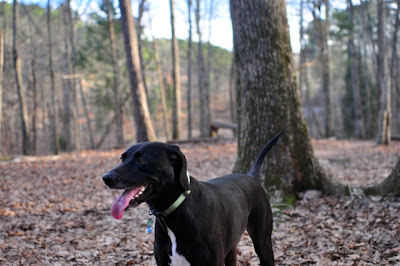 Re-adapting to a rigid fork took a little getting used to though, especially on the rocky and rooty descents! 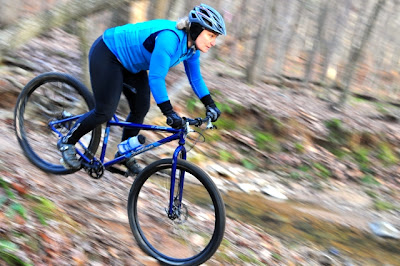 This bike really showed my weaknesses - and my strengths - clearly. So I think putting some miles on it will help me become a better balanced and well rounded mountain biker since I can quickly see where I need more improvement. I discovered today that my lower body strength is not as poor as I thought since the longer steady climbs were easier than I expected and in some cases even easier than they are on my suspended and geared bikes. However, I definitely have a lot of work to do with "burst" power and upper body strength as the areas that gave me the most difficulty today were steep climbs that immediately followed speed-scrubbing turns and needing "burst" strength to lift the bike over the bigger uphill roots and rocks. All in all, the Dollar Bike is a lot of fun though and I look forward to re-exploring many more trails on it in the coming months. 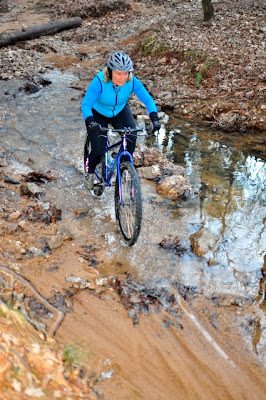 Sometimes all it takes to make an old trail feel new is a change of bike. :-) 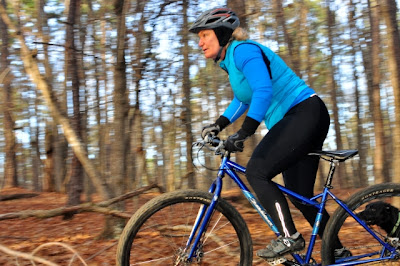 Posted by Tammy Kaufman at 6:55 PM No comments:

The Holiday week started out as a last gasp of summer on Saturday and Sunday with highs in the 70s and 80s! So of course, we had to get the mountain bikes out and take Fry to the trail - which he naturally thought was just awesome. 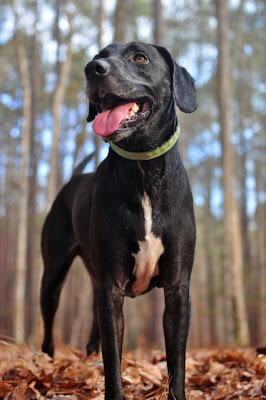 It was quite pleasant to be able to ride through the creek without the water being freezing cold when it splashed up. And look - short sleeves in December! 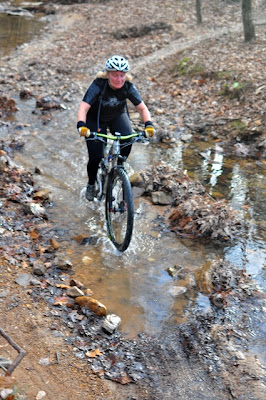 The weather was so nice on Sunday that after our ride, I did a little sketching outside on the back deck, 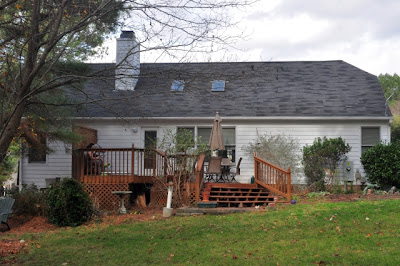 while Fry played in the yard with Daddy. 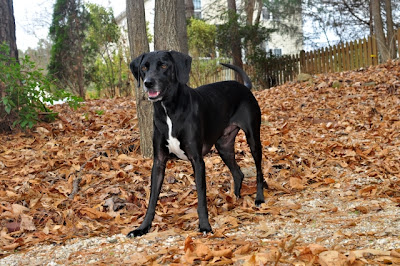 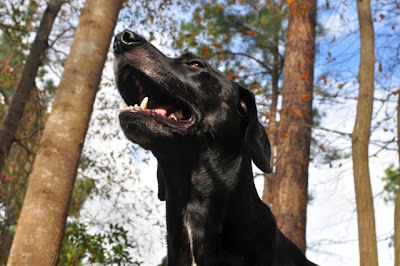 Today the weather was decidedly colder and definitely felt more like December. But since Steve finished putting my extra special birthday present together last evening and the rain finally stopped this morning, we took the new full rigid singlespeed "Dollar Bike" (thanks Kelly and Vanessa!) out for a test ride.
What fun! I had forgotten how much I used to enjoy the carefree ease of riding my previous FR-SS (no gears or suspension or drivetrain to worry with) and it's so nice to have one again.
Happy Holidays y'all!


Posted by Tammy Kaufman at 4:49 PM No comments:

What a fabulous day! Not only is it my birthday, but it's also the six-month anniversary since I first started painting and drawing. I got to spend the entire day (including the pre-birthday weekend!) painting. I pulled out all the stops and played around with a whole variety of media, making being in my fifties feel much more like being a very happy and carefree child.

On this, my six-month anniversary of art, I'm hopeful that there has been some growth and improvement over these past few months from first dipping my toe into the art world this past June.

I've very much enjoyed learning and painting over these past six months, and I'm looking forward to what the next six months brings!

Posted by Tammy Kaufman at 7:10 PM No comments:

This morning I read something that made such a wondrous and profound impression on me that I feel compelled to share it. Drew at Skinny Artist has written an article that has seriously made my day as a newbie "artist". So let me just say Thank You Drew!

The article is talking about amateur artists in general and their place in the world, and is linked here. Enjoy!
Posted by Tammy Kaufman at 7:57 AM No comments:

If variety is the spice of life, then this weekend is starting out quite spicy indeed. I worked all last evening and pretty much the entire day today adding to my sketchbooks, using all types of media and combinations. I obviously have very, very much to learn and I am currently actively looking for a basic drawing class. But hopefully art is somewhat like biking where no time spent on the bike is wasted, and I trust that any time spent working in my sketchbooks is worthwhile. At the very least, it brings me tremendous joy, so I'm going to call it a win. :-)


Posted by Tammy Kaufman at 6:06 PM No comments:

Not generally one to back down from a challenge, I've been working on figuring out how to handle pastels on slightly "grittier" sanded paper. My first attempts were ragged and I gave up perhaps a bit too quickly. Part of it was probably related to my failure to use blending tools and ending up with very sore fingers! So this week I've revisited the coarser grit papers to try some different techniques, with a combination of finger blending, applying barrier cream to my hands and/or wearing gloves, and the use of tools such as blending stumps. Smoothly and thoroughly blending a background color seems to make an easier surface for painting (at least for me!), but the coarse grit still holds the pastels nicely, I've found. This method also seems to help me work a little bit more loosely with the top layers, which is something I've struggled with and I'm really trying to improve on that.
I've been using a combination of semi-hard pastels for earlier layers and finer details, and soft pastels for the looser top layers. I'm finding that I like the textured appearance the rougher sandpaper provides to grasses, trees and even clouds when I apply the top layers of pastels very lightly.
I also decided to try a couple of practice sessions using a monochromatic color palette on my sandpapers. First, I used only blues, leaving the dark charcoal grey of the sandpaper as the background color.
Next up was greys, again on the darker background. These pastels are all grey tones but interestingly I noticed just how strikingly different monochromatic colors can look depending on the shades placed next to them.
I'm continuing to enjoy learning pastels and am finding that sanded surfaces are incredibly versatile, offering a very nice range of effects, and experimenting with them is a lot of fun - I feel like a kid in a candy store!

Things Are Getting Sketchy!

Since picking up a couple of nice watercolor sketchbooks at Art of the Carolinas, I've been really trying to make a dedicated effort to sketching almost every day with at least one goal being to improve my painting. At some point I plan to take an actual class on drawing to make sure I'm doing the correct things, but for now, I'm certainly enjoying just trying the various media to do quick sketches, both from life and from my own imagination. I most often use pen markers with either fiber or brush tips and occasionally will sketch with watercolors or pencils. However, tonight I decided to give India ink a try, using watercolor washes along with it. I'm really enjoying this new medium and am excited to discover all the things I can do with it. :-)

I've also been working a lot with pen markers in my sketchbooks to try and teach myself to draw more quickly and hopefully with better looseness and free expression. The wider chisel-tipped and brush markers make it easier to cover larger sections of the page. But I try to use the smaller tipped markers as well, to make me think more about my mark-making and color choices. One thing I am definitely becoming quickly aware of is that I need to find some classes on color theory asap!
Posted by Tammy Kaufman at 9:34 PM No comments: