Today marks the second full day of Venus living with us.  We have moved her kennel into the living area of our home and changed her kitty litter to the "pearls" type to hopefully stop her from licking her spay incision suture line.  She slept quite well last night, has a good appetite for food and water, and her bowels and bladder appear to be working normally.  She has been playing with her jingly ball toys and even pulled the cloth I had wiped Andy with into her crate and slept with it overnight.  However, she still grumbles and swats at him anytime he gets too near her kennel.  Surprisingly enough, though, she will let Spyder actually touch noses with her and offers absolutely no irritability toward him at all.  I guess that could be perhaps because he is a dog and is much, much larger than her, but she shows no evidence of any fear or or timidity toward him.  Of course, she shows no fear toward anything - she just apparently isn't ready yet for Andy to share any of her personal space.

This morning, she started licking her sutures just a little bit again, so to hopefully distract her until we can get her a surgical collar this afternoon, I placed a hanging scratcher in the corner of her kennel and also hung an elastic swinging feather cat toy from the ceiling bars.  She seems to enjoy the swinging feathers a lot. 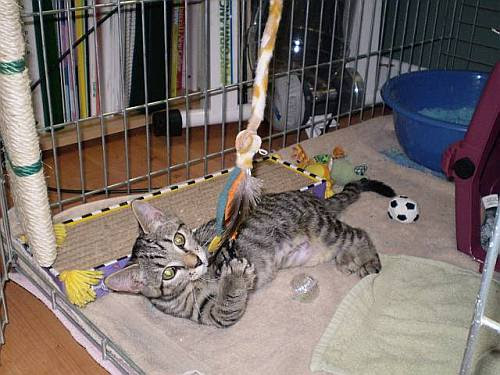 This afternoon, Steve, ever the handyman, made her a surgical collar (complete with a Velcro closure!) from a soft comfortable foam that was used as packing for his bicycle.  It actually appears to be working quite well at keeping her away from her incision line while still allowing her to eat and drink, and she has been surprisingly accepting of it. 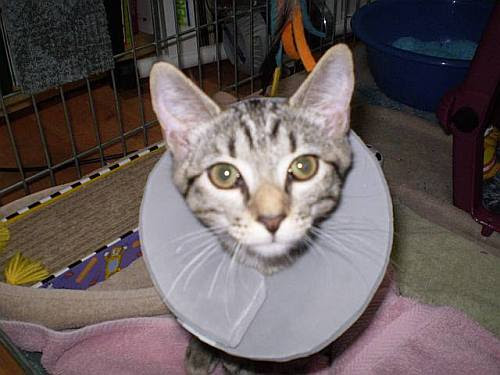 She also continues batting her ball toys around the kennel and really enjoys her petting sessions, but naturally starts to cry just a tiny bit as soon as I close her kennel door afterwards.  This gradually stops after a couple of minutes, but it sure does break my heart to to have to shut her in.  I have to be strong, though, because I know she is not ready to be turned loose in the house yet, with a fresh surgical incision, still being so small in a house with two large, albeit friendly, dogs and a large cat who she is not yet completely tolerating.

We did let her out into the kitchen for a short bit this afternoon while Andy was in the spare bedroom birdwatching from a favorite window, so she could explore just a little and spend some quality time with her new "Mom" and "Dad" (and, of course, the ever-present Spyder), which she seemed to enjoy a lot.  I think it was a nice break for her, and she even went willingly back into her kennel after the brief respite from "captivity".

Andy, though, being the quintessential gentleman and friendly lapcat that he is, still can't understand why she seems to like everyone but him, but fortunately it doesn't seem to have affected his sweet disposition.  He remains as loving toward us and "his" dogs as ever and hasn't demonstrated any evidence of jealousy or resentment toward Venus, the dogs or us.  Poor sweet guy! 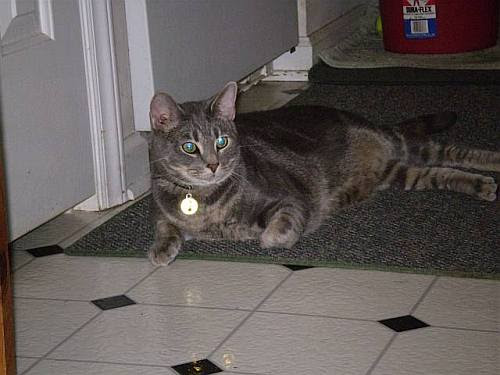 Hopefully Venus will very soon come to appreciate Andy for the absolutely wonderful friend he wants to be for her.  He is trying so hard to convince her that he wants to be her buddy.  He seems to be making a real effort not to appear threatening or intimidating toward her in any way, and he seems genuinely concerned when she cries for more attention after her petting sessions.  I hope that it won't be too long before Venus comes around and decides Andy is worthy of her friendship, because he most definitely is.
Posted by Tammy Kaufman at 3:36 AM