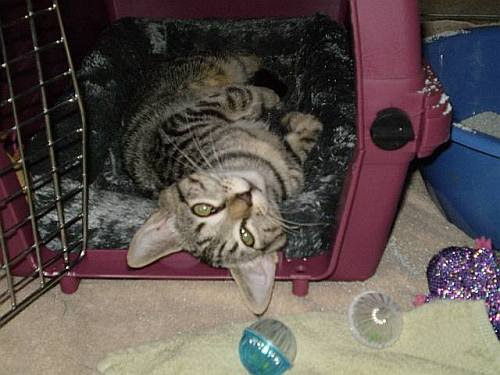 Venus awoke this morning around 5:15, climbed on top of her carrier/bed and yowled for a while until I got up to go pet her.  At this point, she was still somewhat groggy and irritable from her surgery and would periodically growl and hiss randomly.  She finally went back to sleep about a half-hour later.  By this afternoon, however, she has been up and summoning petting sessions from both myself and Steve, to which she responds with monstrous purring that belies her tiny size!  She has had a couple of small meals of dry kitten crunchies and some water, and has had a couple of big tinkles as well as a normal looking "poop".  She is using her litter box and playing with some of her toys - she likes the jingly balls the best.  I rubbed Andy with a washcloth and laid it near Venus' bed for her to accustom herself to his scent (that is the green towel you see in the picture just outside her carrier).  She initially was granted the run of our bedroom while Andy, Spyder and Zoe were happily "confined" to the remainder of the house, which was fine with them since the living room is where they spend most of their time anyway.

Andy's former foster mom came by to visit all the animals this evening and of course, it was at this time that Venus decided her litter box was a great place to sleep which prompted itching of her abdominal incision and subsequently some chewing at the sutures.  On Kathy's advice, we moved Venus' kennel into a quiet corner of the living room where she could see and be seen by the other animals but still be protected by the wire cage which would hopefully distract her from her itchy sutures.  Steve also went out and picked up some of the "pearls" type cat litter since she did not like the shredded stuff and we feared the clumping variety might be causing some of the incisional itching (Venus really likes to throw the litter around!).  This seems to be effective, as she has not slept in her litter box or even looked at her incision line since we changed to the "pearls" litter.

So far, things have been pretty calm since the change of scenery for the new kitty, with virtually no growling or hissing at the dogs when they come to see her.  Also, the grumbling and hissing exchanged between her and Andy is diminishing dramatically, with them now spending most of the time either doing their own thing in opposite ends of the room, or just lying down watching each other curiously, with only the very occasional weak hiss.

At present, though, most everyone seems more interested in napping in their respective areas than anything else, especially following a huge open-mouth yawn! 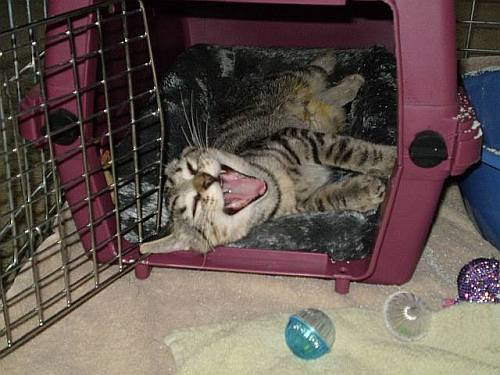