Yes, that's right. We have a flying squirrel taking up residence in our previously unused bluebird house. It's adorable and we hope to get a photo of it soon.
Posted by Tammy Kaufman at 7:59 PM

“Why don’t you believe you deserve to be happy?”

It was a simple, logical question, but one I at first didn’t understand. So I just sat there, not sure how to reply to my well-meaning friend’s very open and honest query as to why I seemed to consistently sabotage my opportunities for joy and fulfillment. And then suddenly, one memory from a childhood I barely recall came to the surface. I saw myself as a small child of perhaps five years, so proud of my stuffed teddy bear and wanting to show it off on a home movie. But instead, I was relegated to the background so my family could instead video my vibrantly flamboyant and outgoing three-year-old sister dancing while I was laughed at and minimized for not being comfortable trying to dance myself. I adored my sister then, as I do now and always will, but as a small child I couldn’t understand why not being like her seemed to mean I wasn’t as good?

This brief and painful memory was soon followed by more.

Being ridiculed publicly when I was unable to “hold it” longer than I was capable of while out shopping and had an accident, again as a small child, and my shame of having the attention of strangers brought to me for losing bladder control. Especially since I had been asking to go to the restroom for hours previously, but kept being told “after we look at one more rack of clothes”.

Being the only kid at school who made the Honor Society who had not one single family member show up to the induction ceremony. The parents of one of the other kids were kind enough to invite me to join them when they saw me sitting all alone, but I still vividly recall the feelings of being embarrassed, emotionally naked and abandoned.

Having my family and their friends mimic me when I mispronounced their friend’s nickname. They may have thought they were laughing “with” me, but as a young child, it most definitely left me feeling that I was being laughed “at” and held up for ridicule – I never recalled hearing the word “cute” associated with the laughter.

And the uncomfortable, twisting in my chair, memories continued on briefly until thankfully they began to subside and I was able to give a little more thought to my friend’s original question. I realize now as a middle aged woman that my family surely loved me and never intended to make me feel insignificant or not good enough. And I would venture that the embarrassing, belittling experiences I had as a child were merely extensions of what those adult family members themselves had been subjected to during their childhood, a sort of perpetuation of a sad emotional downward spiral passed from generation to generation. So I don’t blame my family – I do, however, feel sympathy for them because I know how hurtful those experiences were for me when I was young and it had to be the same for them as well when they were children.

As painful as recalling those memories has been, though, I’m glad some of them resurfaced after all these years. Because now I’m beginning to understand a little bit more about myself. What I began to comprehend was that a childhood filled with feelings of being insignificant, minimized, inadequate and unable to compete apparently has transcended into my adult life and in some weird way has caused me to believe that I have to always feel that way and that success, achievement and accomplishment are not options available to me. I think by realizing that, I'm hopefully now going to be able to take the first steps toward resolution and understanding that what I perceived as a child is not necessarily the reality, and that those perceptions are not set in stone as to how they have to continue.

More importantly, recalling those memories is helping me learn to have more compassion toward myself. For the first time, I was actually able to see myself as a child – a small, helpless, bewildered, embarrassed child who felt minimized and insignificant. And I wanted to take my younger self into my arms and hold her and tell her everything was going to be okay. And that she is important, she does matter, and she is just right the way she is, precious imperfections and all.

I wanted to tell my younger self – and my current self too – to always remember the Buddha’s wise and beautiful words:

You yourself, as much as anybody in the entire universe, deserve your love and affection.
Posted by Tammy Kaufman at 9:49 AM

What could be better than an amazing trail dog? Fry offers encouragement...
Instruction... 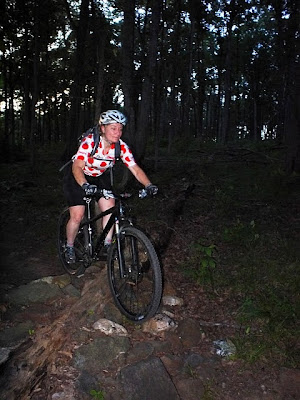 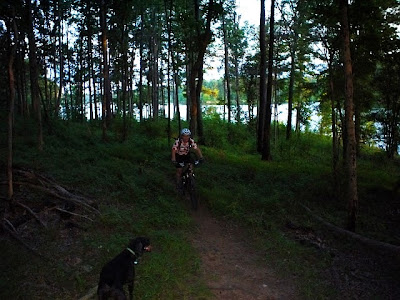 Yep, our boy has it all!

Posted by Tammy Kaufman at 9:43 PM

So while I was lounging around at home being lazy this weekend (other than a quick ride at San Lee, some housecleaning and a little painting), Steve was up at Beech Mountain for the downhill race. Below is the GoPro footage of his practice run Sunday morning. Of particular note is that his actual race run was about a minute faster than practice, and no trees were harmed during his race run...

I'm not sure if it was the fantastic mulch we bought from The Mulch Masters, the ratio of sun and shade our back yard receives, the quality of plants we purchased, plain old good luck, or more likely some combination of all the above, but our tomato harvest this season has been nothing short of astounding.

We've lost virtually no produce to disease or pests this year even with the excessive rain we've experienced recently, and our cherry tomato plants have soared to well over 10 feet in height! 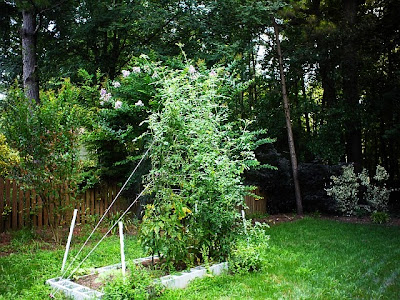 Pretty much every single day we bring in plenty not only for ourselves, but enough to share with our neighbors as well. The cherry plants are exceptionally high producers, but we particularly enjoy those so more often than not they get consumed as soon as they are rinsed; that's the reason that bowl looks so sparse in the photo. 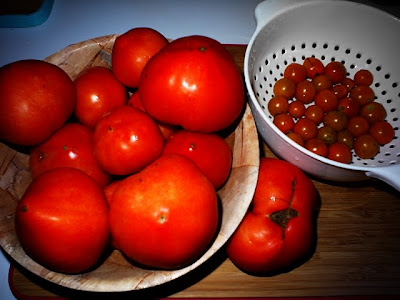 Looking forward to what this fall's harvest holds in store and hoping for similar success with the autumn plants.
Posted by Tammy Kaufman at 1:12 PM 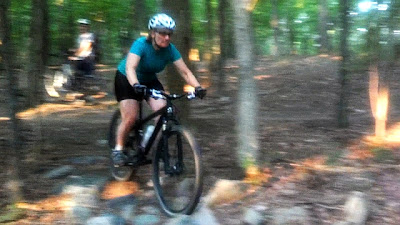 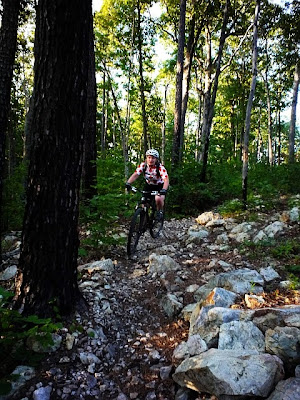 Posted by Tammy Kaufman at 9:21 PM

Despite not having a natural talent for it, I'm surprisingly finding painting, sketching and drawing more and more to be my salvation. It's peace during times of chaos, courage standing up to fear, and comfort in the face of loneliness. Just picking up a brush, pencil or charcoal and applying it to a blank awaiting page or canvas is simultaneously terrifying and yet liberating in some strange and wonderful way. But each time I face the challenge, regardless of how amateurish the outcome, my spirit seems to reawaken. 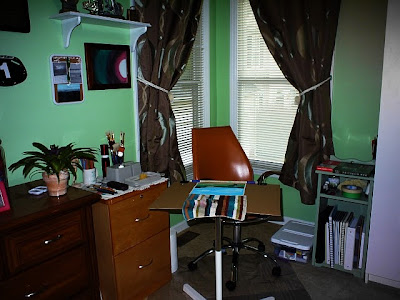 I continue to - and likely always will - keep my sketches and paintings reserved for my eyes only, but their purpose right now is to soothe my own soul. And putting my creations out into the universe for judgment and criticism is not, at this time, what my spirit needs or wants. There may be a day when I reach that level of courage, but today is not that day. My little studio itself has undergone some minor arrangement and organizational adjustments as I'm discovering what is more convenient, comfortable and conducive to the creative process by way of trial and error, but is now truly becoming an art sanctuary for me. 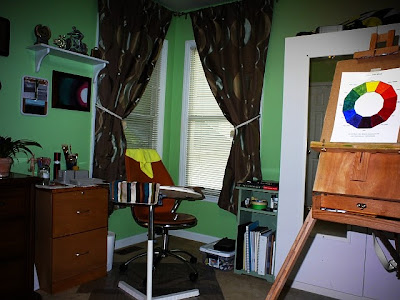 Posted by Tammy Kaufman at 3:10 PM

I don’t like feeling inadequate. I don’t like perpetually feeling embarrassed and ashamed of my many, MANY shortcomings and failings. I don’t like being trapped in an endless cycle of discouragement and disappointment and being unable to see any way out. And I really don’t like crying when others can see me, especially about stupid pointless things, and particularly in front of people who don’t really even know anything about me. I don’t like feeling the overwhelming pain screaming I’m not good enough, I will never be good enough, that the hurting is all purely my fault and there is nothing I can do about it. But the door appears closed tight and I can't find any way to open it.
Posted by Tammy Kaufman at 10:00 AM


I've had the opportunity to take the new Air9 out for a couple of "get-to-know-you" trail rides over the past few days and as much as I hate to sound like an advertisement, the truth is Niner really knows their stuff when it comes to nailing mountain bike geometry. At least as far as when it comes to what I am looking for in a bike. Steve did an excellent job of matching my bike fit to the Rip, and we only had to make a couple of tiny saddle position adjustments to get my knee and hip correctly aligned. We set up the Air9 with the G2 fork I already had and bumped up the travel to 100 mm and the bike just rocks with that setup, plain and simple, and is seriously fun to ride! Once I got back into the zone of riding a hardtail again, i.e. standing up a bit more and letting my legs provide more of the suspension work, I didn't really even notice the rocks or roots. 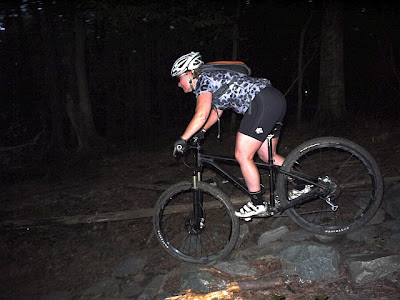 This bike handled like an absolute dream just as I have come to expect from a Niner, equally as nice as my Rip9 - and that is saying something because I LOVE my Rip. Fast, responsive, incredibly confidence-inspiring, quick yet stable, and a pure climbing machine, the Air also rails the corners with tight crisp handling, even for me with my substantial lack of biking skills. As with the Rip9, I can only imagine what this Air9 could do in truly capable hands...
Posted by Tammy Kaufman at 10:06 PM