After my fiasco of an attempt at a race last weekend at Warrior Creek, Mother Nature apparently decided to give me a reprieve and a chance to redeem myself by raining out the local Curse at the Crab 6 hour race originally slated for the same day and causing it to be postponed until THIS weekend.

My female duo partner had decided to take a break from racing for a few weeks, so my dear husband Steve agreed to partner up with me and we entered as a coed duo for this one. Curse at the Crab is traditionally a fun, low key local endurance event, so Fry joined us this time around as well. Before the race, we took him down to the lake for a quick swim and then spread out his blanket in a nicely shaded pit area, set out his water bowl and gave him his cookie, bully stick and chew toy. Debbie stopped by our pit area to get a photo, but Fry was more interested in watching all the pre-race bustle of activity than posing for the camera! 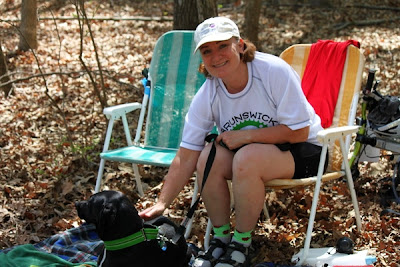 With the experience gained by attending a few downhill races last year, Fry has become quite comfortable settling into the routine and was fairly content to observe all the goings-on, even if he did find it a little disappointing that he couldn't join Mommy and Daddy on the bike trail this time. 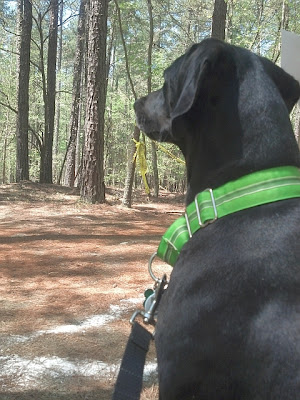 Steve rode the first lap for us, while Fry and I hung out with Juan to snap a picture or two. 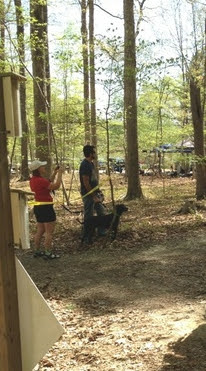 Lake Crabtree is a fast trail without too much in the way of technical, and is just plain fun to ride. Coupled with the gorgeous weather and the friendly faces on the course, it was impossible not to have a good time. I don't know if I just got lucky with my positioning in the laps or if this trail is that well designed for traffic, but every single person I overtook or who overtook me seemed to have good race experience and each pass was managed seamlessly with no loss of momentum for either rider.

Despite having increasingly severe pain in my right (post surgical) knee, I managed to keep my lap times fairly close to Steve's. Of course, a lot of that was due to the fact that his singlespeed gearing was a little low for this particular trail. He still rocked it though, and put us into a good position after his first lap. 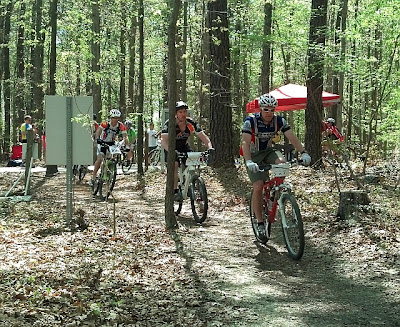 The race ran from mid afternoon into the night. We alternated the first three laps, then I doubled up for a fourth and Steve doubled up on his fourth and fifth since we only brought one set of lights and he enjoys night riding more than I do.

In the end, out of five coed duo teams, Steve and I wound up in third place with nine laps, while first and second got ten laps each. Especially considering neither of us had really prepared for this race and were just out there for the fun of it, we felt good about our results and the fact that our lap times remained pretty consistent throughout.

It was a great way to spend a beautiful Saturday - riding a fun trail throughout the afternoon and evening, seeing some old friends and making new ones, and sharing time with Steve and Fry, the two best guys in my life. 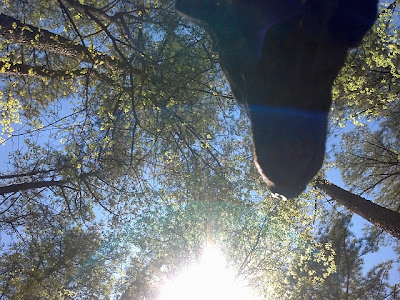