Not even close. At the 6 Hours of Warrior Creek today,  I competed in the Duo Female category. Despite the rain on Thursday, the trail was in surprisingly excellent shape for the race and just got better as the day progressed. So even though I had ever ridden WC before, we at least had good trail conditions - thanks BMCC Trail Crew!

We had already decided ahead of time to just take our time and enjoy the ride for a low pressure race - a challenge in itself at such a big event (408 registered racers) - and my teammate rolled into the transition area two hours after the start. The first words out of her mouth were "There were SO many climbs!" and she looked completely wiped out, so my stress level about this unknown-to-me course increased a few notches. She also indicated that she didn't think she wanted to ride another lap, so I headed out onto the trail, wondering if I would be able to do two back-to-back 13+ mile laps in my current extremely unfit state.

As I wound around the twisting and curving trail, it wasn't long before I realized my lifelong acrophobia with associated height vertigo was flaring more than usual and by the third (yes, only the THIRD) mile in, I was actually bordering on a panic attack, feeling like I could not balance myself at all and completely unable to manage the larger bermed turns. Consumed by the perception that I was, at any second, going to fall off the side of the mountain into a deep-ass lake far, far below (despite the reality that the trail is, in fact, plenty wide and beautifully bench cut), I was reduced to walking most of the switchbacks and what I perceived as "exposed" areas. I was feeling utterly and completely humiliated to have multitudes of other riders catch and pass me as I hiked alongside my bike on these very smooth and totally rideable stretches of trail. It was beyond embarrassing and I just wanted to crawl in a hole and die, when I heard a familiar voice ask me how I was doing. I realized it was Steve who had been sitting by the trail taking photos, and I could barely choke back the tears when I told him I was just terrified.

My dear sweet husband, realizing the trouble I was having, apparently took a few pictures during the sparse moments I was actually ON my bike, making it appear I rode a lot more than I did, but since I could not look up without increasing the dizziness, I didn't even realize he had done that. Thanks Honey - you're the Best. 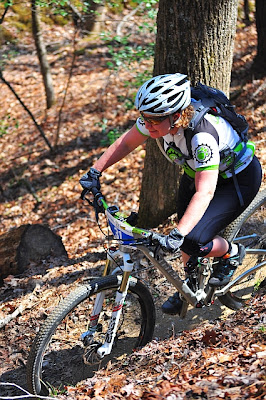 For the next what seemed like a thousand miles, I stumbled and struggled along as best I could, focused purely on trying to stay out of everyone else's way as much as possible, feeling crushed, defeated and wishing I was anywhere but on this trail at this moment.

I continued to walk an excessive amount of a trail I should most certainly have been able to clean with ease. I wussed on the handful of simple rock gardens, and chickened out and walked far too many of the ledges and the big berms which I'm sure looked much worse to me than they actually were in reality, although I did force myself to ride all but two of the bridges, including the rock creek crossing. Despite this, I continued to struggle hopelessly and gave up almost immediately on most of the steep climbs and tighter switchbacks. Additionally, I was not confident enough to ride the bigger berms high like you're supposed to, and riding them low only made the turns too tight for me to manage. So between riding so slowly the bike barely remained upright and just flat-out walking many sections, I ended up spending most of my time on the trail pulling over to let the 400+ legitimate racers get around me. By my watch, I spent at least 20 minutes of my lap simply pulling off to let folks pass. I was an obstacle, a speed bump, but most certainly NOT a racer.

Fortunately, by the last mile or so of the trail, I somehow miraculously managed to clean the last series of uphill switchbacks and gradually the dizziness started to clear a bit. I was starting to feel a little more comfortable and somewhat less dizzy and slightly less terrified now, but by this time my lap was almost finished. I still was expecting to have to do another lap, but to my great surprise - and relief - Sarwat was standing in the transition area with Steve when I finally crawled in with my tail tucked between my legs after two-plus hours. To my tremendous relief, my teammate told me she felt better after a break and wanted to go ahead and ride another lap. She went out and turned a 1:43 lap but missed the cutoff thanks to my ridiculously slow run, so we ended up with only three laps, for dead last out of 15 female duos.

To answer the question, am I a warrior? Nope, not even close. Tonight I don't even feel like a mountain biker. In fact, I don't feel like much of anything except an old, out of shape, overweight, unfit embarrassment to my bike, my teammate, my dear husband and myself. Right now, the one positive I can find from today (other than at least see the incredible work the BMCC trail crew has done on these trails and attend a beautifully run event in a spectacular location) is that I got punched in the face with the reality that I can no longer just sit here and pretend like maybe I've not really totally let myself go health wise for the past several years. It's painfully obvious to me now that I have ignored my health, my weight, my fitness and my athletic skill potential, and the scary part is that at this point I'm not 100 percent convinced it isn't too late to recover from it all.
Posted by Tammy Kaufman at 10:47 PM