Okay, so it's actually Sunday. But with our little furbaby, let's face it - pretty much EVERY day is Fryday around here.

Since Fry had limited outside time yesterday, we decided to give him a good outing today, especially since it was such gorgeous spring weather with full sun and temperatures in the low 70s.

We took the little man out for a trail run, but it turned out to be bonus fun when we happened across another couple out enjoying the day with their two dogs as well. The three pups played together great and Fry especially had a blast with the other three-year-old male, a lab/Plotthound mix (the beagle was more interested in following her nose to check out all the woodsy smells). The two boys ran around, played chase with sticks, swam in the creek, and the Plotthound even taught Fry how to take a big high JUMP into the creek. Once Fry realized how cool he looked leaping dock-jumping-dog style into the water, he was more than happy to show us all his new skill multiple times! Unfortunately, Steve and I both completely forgot he had the camera in his backpack, so no pictures this time. You'll just have to take my word for the fact that Fry is totally awesome. :-)

After about a half-hour of doggy play time, we said our goodbyes and hit the trail again to let Fry get a little more running around as he was newly refreshed from his swim. Then it was back home, where he played outside in the yard briefly and chased a few squirrels, and has now curled up on the couch, head on a comfy pillow, for a well-earned nap. 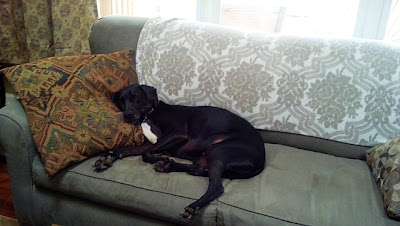 Posted by Tammy Kaufman at 5:12 PM