To be honest, I wasn’t really sure I was ready to adopt another dog after so recently suffering the heartache of losing my precious Spyder to bone cancer. But the unbearable loneliness of coming home to a dogless house every evening after work was doing nothing to ease my grief and sorrow, and the sad eyes and skinny body of the little black pup in the Super Dog Rescue adoptable dog photo listing were so heartbreaking that I reluctantly agreed to at least go meet him. 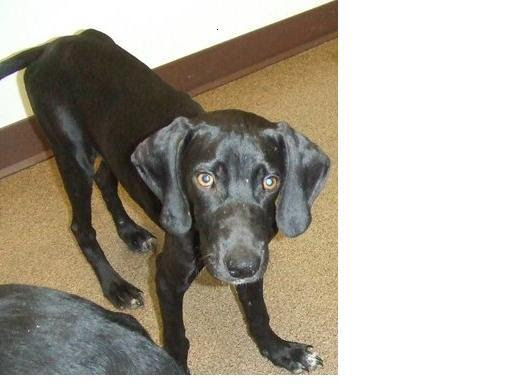 Even before heading to the foster home, I had pretty much already decided that I was just going to see the dog, as I had already made the rounds at the local shelter and, although they were all special in their own way, none of the dogs I had met thus far had had that special “something” – that intangible feeling I had gotten with both Spyder and Zoe that let me know we were meant to be family. And I just figured the right companion wasn’t in the cards for me yet.

On arriving at the foster home, I unenthusiastically knocked at the door. Imagine my utter surprise at being greeted by this adorable, wiggly little black body with the most soulful brown eyes that absolutely melted my heart right where I stood. 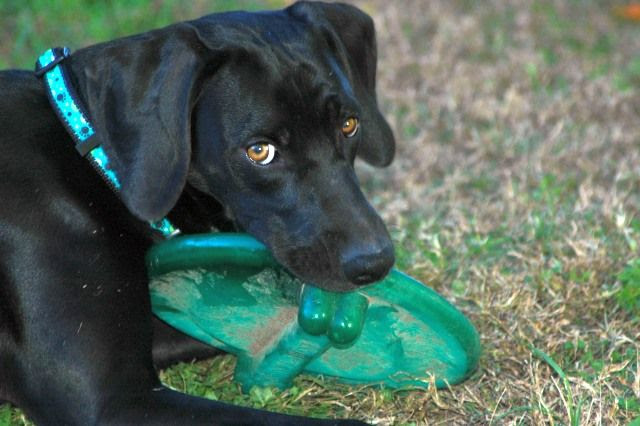 After introducing herself to us, the foster mom invited us to the living room where I sat on the couch and Fry (then known as Mike) hopped up into my lap, planted the softest puppy kiss on my cheek, then curled up with his chin resting gently on my thigh. I was immediately helplessly, hopelessly in love with this little miracle dog – he had been spared a gruesome death in a Georgia pound, rescued by Super Dog the day before he was scheduled for the gas chamber, after having suffered near starvation in a neglectful home situation. I mouthed to Steve “I want this dog”, but he acknowledged he had known that the instant we laid eyes on Fry. :-)

That was Wednesday, November 3, 2010. Fry’s foster family and neighbors had asked for some time to say goodbye to him as they all had fallen for his charms as well, and we needed to make arrangements at our own home since we hadn’t really planned on adopting again just yet. So we scheduled to pick him up the following evening after work. I spent almost the entire night preparing his bed, food and water dishes, and generally making plans for his arrival, including taking off work the day after we were to bring him home in order to acclimate Fry to his new home and surroundings. And on Thursday, November 4, 2010, our lives changed forever once again, with the addition of a new puppy into the household. 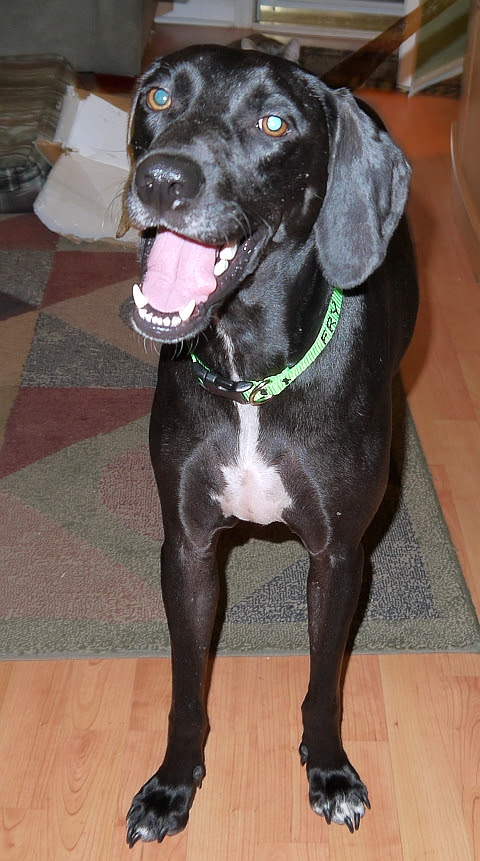 From the moment Fry arrived at our home, he seemed completely content with us. And although the past year has been a rollercoaster ride, as it always is with a new dog, it’s a ride I wouldn’t trade for anything in the universe. As with our previous furbabies, we’ve experienced chewed up furniture, holes dug in the lawn, bedtime “zoomies”, snuggles on the couch watching TV, puppy kisses, learning to walk on a leash, dog hair on the floor and furniture, worrying with every little scrape or injury, and laughter with each new trick learned. 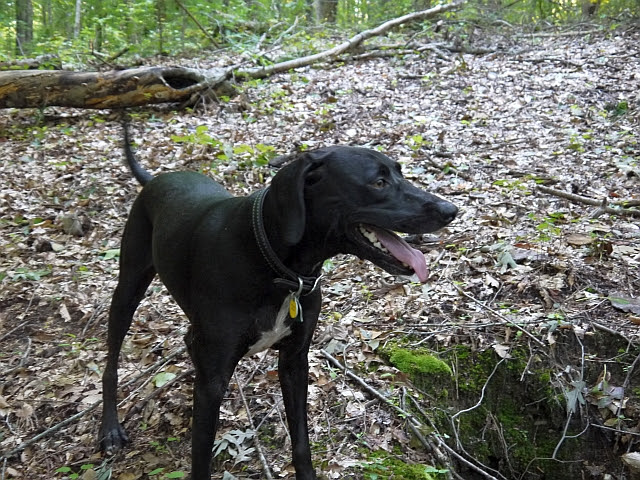 Each of our dogs has had – and will always have – a special place in my heart, and Fry is no exception. In just one short year, he has already taken me from couch potato to borderline athlete and brought me back to mountain biking, hiking, jogging and swimming. Fry’s loving and gentle nature transformed my two-year-old nephew from a child who cried and screamed at the mere sight of a dog to a child who now shares apples and hugs with Fry and adores petting him. Even our cats love Fry, and are never so content as when the three of them are curled up on the same couch together. 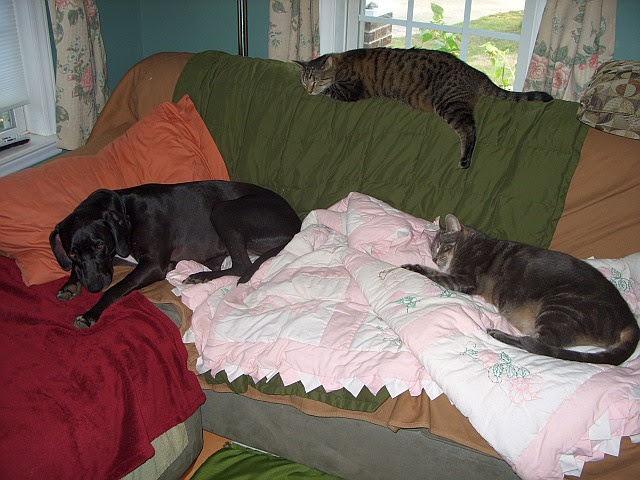 Fry is a quick learner and a marvelous athlete with unmatched speed and agility who loves his family more than anything and wants nothing more than to please us. He is clearly primarily an English Pointer mix and frequently points wildlife when we are out walking – and even climbs trees! His love of swimming belies possibly some Labrador Retriever too, but I think there may be some hound in there as well, based on his beautiful singing voice. LOL 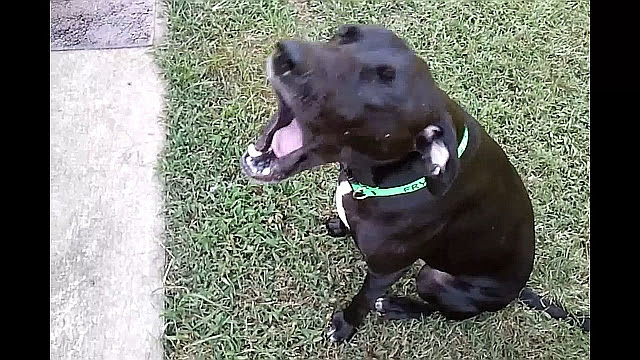 This little man has quickly become my buddy and my joy. His happy and submissive nature is truly remarkable, and I honestly have never seen a dog as simultaneously bold and gentle as Fry is. He is completely confident on the gun range or in a storm, with no fear or flinching at any noise, and yet will take a treat from the hand of a child with the softness of a feather. 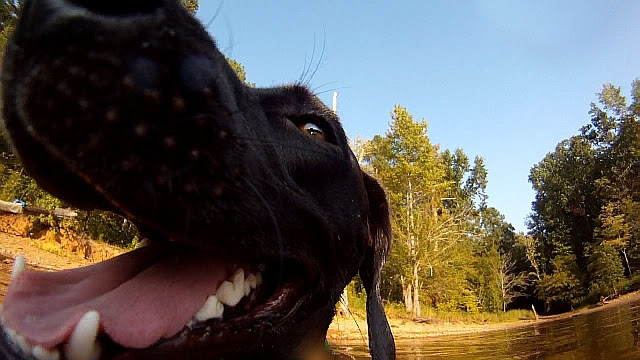 Naturally, I have dozens of videos and photos of Fry's first year with us in my YouTube and Picasa galleries, and many more to be added as time goes by as well!

He is my angel, and I’m so thankful to Super Dog for saving his life, to his foster mom for sheltering him and to Fry himself for coming into my life at the time I needed him most. I only hope I can make the rest of his hopefully long and happy life as part of our family as complete as he makes mine. :-) 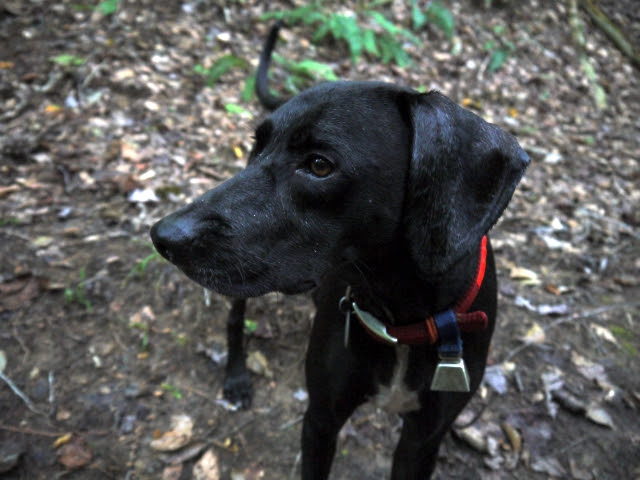 Posted by Tammy Kaufman at 4:51 AM