Well, I thought I was ready for the State Games of NC mountain bike race at Hobby Park. But apparently I underestimated the toll that several years of aging and an extra 40 pounds would take on my attempt to re-enter the world of cross country racing. With the guidance of my canine cycling coach and best buddy, Fry, I’d been riding the local trails here almost every day since deciding to do the State Games race a couple of months ago, and I honestly (if perhaps naively) thought I would be prepared. After all, I only had to do one 6.4 mile lap on a trail that, while definitely not a beginner trail, shouldn’t have been overwhelmingly difficult. As there was another race in a big local series the same weekend, turnout was exceptionally low for the Games, which was good news and bad news for me. Good because I didn’t have the pressure of a really big race for my first one back in several years. Bad because with no one else in my class there was no one to push me and let’s face it, standing on the podium alone kind of made me feel like a fool.  But the truth is, it’s not like I haven’t looked like a fool before, many times, many many times. 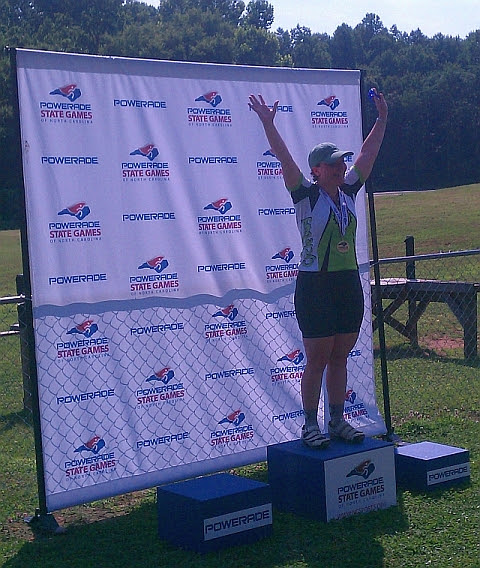 Checking out the trail before the race began, I didn’t really note any sections that appeared particularly unnerving. Of course, I didn’t scout the entire 6 miles, so what I thought were the sections where I might have difficulty actually weren’t the problem areas at all! The course began with an ugly climb through the grass from the lower parking area to the upper lot – at least we didn’t have to ride up the paved soapbox derby hill, but I’m not so sure the grass section was any easier at all really. Once at the top, a quick right turn dumped me into tight twisty single-track which wasn’t too bad at first. But as I wound further and further down the trail, I began to worry a bit since I know trails that head down that much eventually have to come back up, and come back up this one did. Then the rollercoaster ride began. Steep root-infested climbs wedging between tight trees, followed by equally steep screaming chutes with level after level of root and rock drop-offs, winding around into high banked turns that immediately twisted back upward. For the first couple of miles, I somehow managed to muster the strength to claw my way up the rooty, twisty climbs and hang on for dear life through the chutes and drops. About midway through the trail, though, my strength quickly began to wane, and I realized the folly of generally only riding about three miles at a stretch back home. 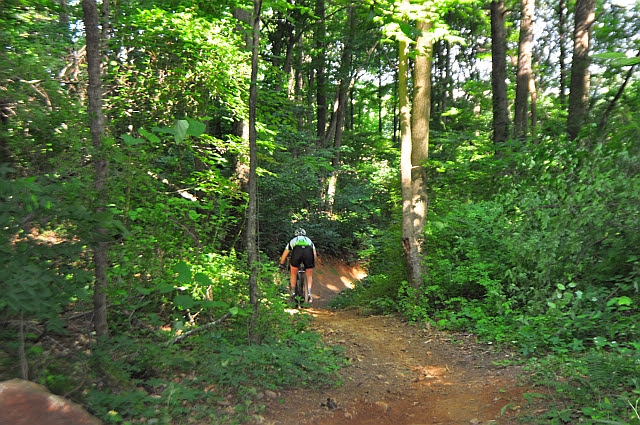 At roughly mile three, I began to fade on the climbs, and was reduced to walking the steepest, rootiest top sections. I still continued to ride the chutes and drop-offs, with the exception of one particularly sketchy looking descent with a nasty root tangle of a drop where I dismounted and jogged instead, opting to give my aching arms and back a bit of relief. I was happy to see bridges constructed over what used to be a scary rocky creek crossing, but the grueling climb that followed remained and I was only able to clean about three-quarters of it before crumbling and humbly walking the top section of that one as well. I got a brief rest when the trail crossed out into the field before climbing back into the last section. I had managed to soothe my bruised pride somewhat by riding down the remaining drop-offs, with the exception of a long stretch of rickety looking rocky “steps” at the top of the last section of trail where I totally chickened out and once again hoisted my bike on my shoulder and ran down.

Once the trail dumped out onto the final grass stretch toward the finish, I hung my head as I crossed the finish line embarrassingly far behind everyone who started in my wave, including the kids in the 10-13 year old age group. Worse, when the results were posted, my lap time was the slowest of the day. Am I disappointed? Absolutely. Do I feel I did the best I could? Honestly, I’m not sure. On the one hand, I’d like to think I did since it would be a shame to enter a race and not leave it all on the course. On the other hand, though, how sad if that really WAS the best I had???  All I do know is that for half the race, I felt like I was gonna die and the other half I was praying for death. It seemed like I spent the entire time on the trail either grinding up painfully rooty steep climbs or being thrown down rickety staircase descents littered with drop-offs every few feet, with no chance to rest hardly anywhere. I don’t recall this trail being so brutal, but then again the last time I rode it, I was a much younger and thinner woman with a lot more fitness than the gal who showed up this weekend. I can only hope that where I am now is not necessarily where I’m destined to remain… 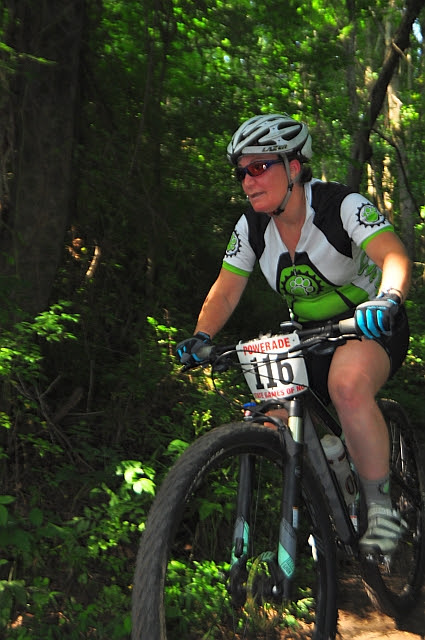 Posted by Tammy Kaufman at 5:40 PM