Some Kind of Wonderful

This past April - the 9th to be exact - marked 18 years since the first time I ever rode a bicycle - and what a long strange trip it's been, to borrow a phrase from the Grateful Dead.

In that time, I've made countless extraordinary friends, been to incredible places, had the opportunity to help build and maintain several local trails, and accomplished things competitively I never would have thought possible (especially for a bookworm like me who was never sports minded as a child) - I got signed to a variety of race teams and completed dozens of 24 hour, 12 hour and 6 hour solo endurance races; 24 hour, 12 hour and 6 hour duo/team endurance races; cross-country races; marathon distance races; downhill races, all while riding absolutely breathtaking trails in multiple states. During many of these events I was afforded the amazing privilege of racing alongside the highest caliber pro riders (many of whom are the coolest and nicest bike people you'd ever hope to meet) on the circuits. I even finished a biathlon and a couple of road criteriums! Along the way, I've suffered crushing defeats with more last place finishes than I care to remember, including some that were first and last as I was the only competitor in my class; had spectacular spills along with the thrill of cleaning sections of trail I didn't think I could; attended bike clinics with outstandingly talented pro instructors; was interviewed by various newspapers and other media; and even got lucky enough to get published in a handful of magazines. Most surprisingly to me, given my late start in sports in general, over the years I somehow managed to even win a few events and amass a room full of trophies, plaques and medals including the occasional National Championship title along with the honor of getting named to the US Masters MTB Team two years in a row.

But, believe it or not, this isn't a "look at me, I'm so hot right now" post. It's more a reminder of how important it is to appreciate what we have, since all of those things I just listed above now seem a lifetime away for me. I don't believe I ever really fully appreciated those truly wonderful moments in time, but then after suffering a debilitating knee issue several years ago, I honestly thought my memories, photos and those awards were the only reminders I was ever going to have of my life in mountain biking. And suddenly, they meant the world to me.

Fortunately, Dr. Greg Combs at Velosmart was able to work wonders with alleviating my crippling pain and helped me start to get my mountain biking life back. I'm pretty sure I will never again compete at the same level or intensity as before, but that might be a good thing because now I can focus on the pleasure of simply being able to ride for fun, especially without mind-numbing pain on each pedal stroke, and that's more than enough for me at this juncture in my life. I think this photo really captures the unbridled joy I feel once again when I'm on my bike...what do you think? 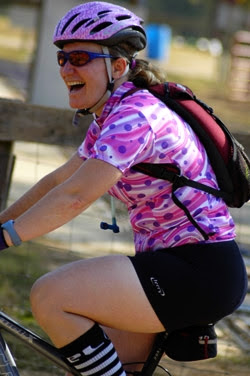 Getting this second chance at the sport I love and that has defined me for a good portion of my life has changed my outlook in so many ways. I used to fret and worry that I wasn't any better as a rider than I thought I should be, that I wasn't winning as much as I thought I should, that I ought to be faster, stronger, more technically skilled. I wasted so many hours, nay years, taking something that is a GIFT, a JOY, a PRIVILEGE - the ability to just RIDE MY BICYCLE - and instead spent too much time stressing about getting dropped, being scared of technical trail features and obstacles, blah, blah, blah.

Maybe it's maturity now that I'm in my fifties or more likely it's knowing what it feels like to potentially lose so much of myself when I thought I may not ever be able to ride again, but I'm not worrying about that piddly crap any more. I used to actually deny myself joining rides with other people because I was afraid of being the slowest rider there. Seriously - I sacrificed so much just for my ego. Yeah, that's right, I said it - my EGO - that's the only explanation for letting such a conceited egotistical concern lock me in isolation. Well, not any more - so what if I'm the slowest? It didn't matter 18 years ago and it doesn't matter now. What does matter is that I've been given a second glorious chance to return to what drives my spirit. How fast I ride - doesn't matter. How many technical sections I either fail to clean or just don't want to do - doesn't matter. How many climbs are a bit too much for me to make - doesn't matter. How many folks drop me on rides - doesn't matter. I've started riding with some friends again lately and yeah, I'm usually about the slowest rider there, but even so, I'm having a blast and I have no problem with faster folks passing me - riding slower means I get to spend even more time in the woods on the trail. Hahahaha.

I don't know exactly when I stopped worrying so much about my skill and speed-related deficiencies as a mountain biker. But when I did, something wonderful began happening. I started getting faster! More shocking than that, I started finding a little glowing ember of confidence buried deep inside me encouraging me to actually try some of those technical sections. And lo and behold, I started cleaning them! Oh, don't get me wrong - I am now and will likely always be a big old chicken from the word "go" and every time - every single time - I approach a log crossing, rock garden, technical climb, root tangle or sketchy descent, I feel a nervous lump rise up in my throat and I get, quite frankly, scared like a little fraidy-cat. But increasingly more often now I try those sections any way, in spite of, or maybe because of, my fear. I think at this point I'm more afraid of what I almost lost, and that would have been far worse than any so-called "failure" of not riding a technical section or being slower than someone - or everyone - else.

I remember my dear friend, Jacquie Phelan, telling me years ago "I hope nothing quashes your love of riding, pure and simple... Be aware of that glowing ember, let it glow.”

Jacquie is a brilliant woman and an icon of mountain biking, and I believe she would approve of the fact that my light of pure cycling joy is burning brighter than ever. 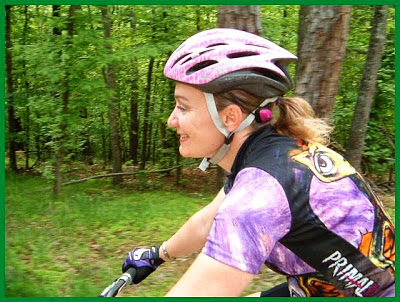