Today was one of those days. It started out innocently enough - laundry, some general housecleaning, and preparing for an afternoon visit with one of Fry's doggy friends. With a break in the weather around midday, we began work on the back deck while Fry was out in the yard with us. I was trimming some scraggly bushes when I noticed a squirrel hanging out under the storage shed, but fortunately it had been keeping a low profile and Fry didn't seem to notice it, so I wasn't overly concerned at first and everything seemed fine. But that's when it all came crashing down. I saw Fry freeze at attention but before I could take two steps to get to him, he had already charged toward the little critter. The next sound I heard was a chilling scream and then Fry came running out of the bamboo stand with his face covered in blood and splattering red sprays of it everywhere. I managed to sponge off his face enough to see that at least his eyes were unscathed, but he had a terrible looking gash across the front of his nose where apparently the squirrel had clawed him in its attempt to escape; the wound appeared to continue inside the nostril. There was so much bleeding I wasn't able to tell if he had any other injuries, so I called the emergency animal hospital to let them know we were on our way there.

Upon our arrival, the hospital luckily was empty of other patients so Fry was able to be seen right away, although he did manage to splatter blood all over the floor, several of the waiting room chairs and the technician's shoes and pants before being taken back to the treatment area. :-(

After a short while, the doctor brought Fry back out and told us he had given him some narcotic pain medicine and glued the nose wound back together. It immediately began separating, however, so he took the poor pup back and applied some additional skin glue. They had us wait for another 15 minutes or so to ensure this application was going to hold, and then sent us home with instructions to keep Fry quiet for at least a couple of days (yeah, that's gonna be easy), watch the wound for any signs of separation or bleeding, and to give him Benadryl as needed. They said the wound was not terribly severe but was in a very difficult to heal area so if there were any of the above signs, to call right away since he would probably then require cauterization of the wound - hopefully that won't be necessary.

We brought Fry home and he has been sleeping restlessly with intermittent whining and whimpering, and still seems rather out of it, probably due to the narcotic. I plan to stay here with him tomorrow to monitor the wound and make sure he doesn't paw at it or rub it, opening it back up. Unfortunately, the glue came off within an hour of arriving back home, but a call to the vet reassured me that unless it began bleeding actively, I should just keep a close eye on Fry and monitor him for bleeding, wound separation or signs of infection. 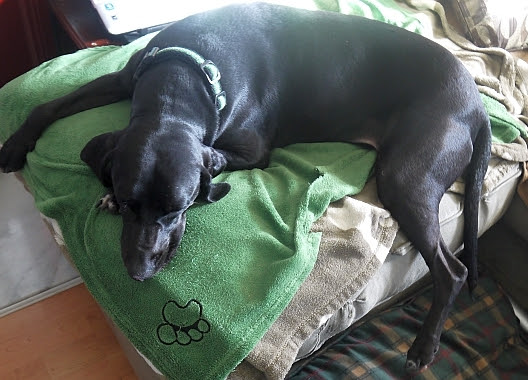 I had just settled Fry down on the couch for a nap when Steve somberly walked in and told me he found the now deceased squirrel. Poor guy only made it maybe two steps from where he and Fry had tangled, and most likely died of internal injuries. I don't know that Fry intended to kill the squirrel, but the tiny thing really didn't stand a chance against the jaws of a 52 pound dog, and honestly I'm more than a little surprised that Fry was even able to catch it in the first place.

I've been feeling a little blue and sort of "lost" emotionally of late - probably due to spring coming and finding me so overweight, out of shape, and just generally feeling disconnected from my youth I guess - so this whole incident made me very sad and weepy and I really needed to find a happy place.

Wandering aimlessly through the house while Fry was napping, I serendipitously noticed my recurve bow on its hanger and decided on a whim to take it down and run a quiver or two of arrows through it.  As arrow after arrow found its mark in the bullseye with seemingly no effort on my part, I slowly began to feel some of my sadness and stress slipping away. The funny thing is, archery is something at which I will in all likelihood never compete. I don't find myself searching for tournaments, "practicing", or "training" or anything else stressful or pressurized with it. When I'm standing behind my bow, I'm necessarily tall, bold and confident, with a dedicated focus on putting the arrow exactly where it needs to be, but somehow there is no pressure because it's just me and the bow and when I draw the string and arrow back, that is all there is at that moment in time. And maybe that is WHY recreational archery seems to be a Happy Place for me. 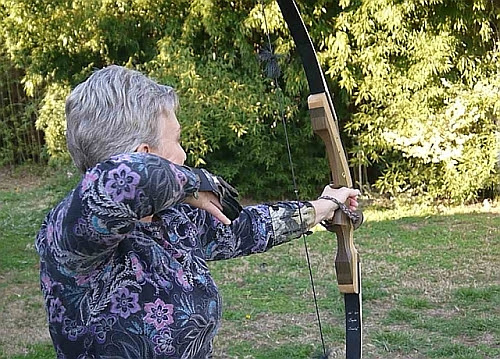 Posted by Tammy Kaufman at 3:18 PM