After a Rough Start - Some Improvement

This morning began with a very rough start for Spyder. He was so lame and in so much intense distress that he had to be assisted just to walk and was panting heavily with pain. He appeared in such bad shape, in fact, that Steve and I were both very concerned he may not survive the weekend. I elected to stay home with him in light of his severe discomfort and called his veterinarian to move his appointment, scheduled for tomorrow, to today. We gave him his medications and he finally settled down on his doggie-bed in the living room while I sat on the couch to keep an eye on him until his appointment time. Venus curled up beside him, snuggled up right next to his back, like a good kitty-sister and they slept there all morning.

Shortly after lunch, Spyder finally woke up and asked to go outside. Although still very lame, he seemed more perky and alert than he has in the past few days, and even stretched out in the back yard to bask in the autumn sun for a brief while. By the time of his appointment, he seemed almost like his old self, except of course the huge swollen mass on his left shoulder and the still very noticeable and obvious limp. His vet examined him, drew some baseline bloodwork and got a urine sample. She confirmed his prognosis as being quite grim with respect to survival, doubtfully more than a few months due to the aggressive metastatic nature of the cancer, but noted his health otherwise was surprisingly good. We will be keeping him on three-drug therapy, but are going to switch his Rimadyl to meloxicam both for better cost-effectiveness and easier dosing. The scary part is that he will need to be off the Rimadyl for the next couple of days to flush it from his system prior to starting the meloxicam. Hopefully his "helper drugs" of gabapentin and tramadol alone will control his pain sufficiently during this brief interval until the meloxicam can be started. We are continuing to ice his swollen shoulder and apply DMSO, and he has some herbal support on the way as well which we hope will provide some additional positive benefits. My eyes and nose having been cried raw, it was a great relief to see Spyder feeling better late this afternoon and I hope we can achieve a satisfactory level of comfort for our beautiful boy during his remaining time with us. 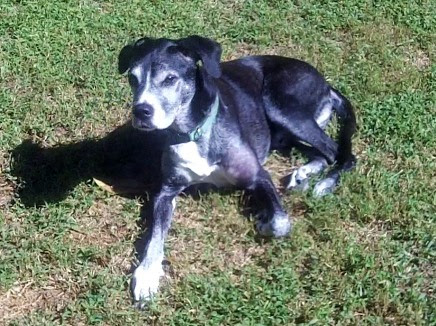